I’ll start this entry with a company you may or not heard of: Dorman Long & Co. 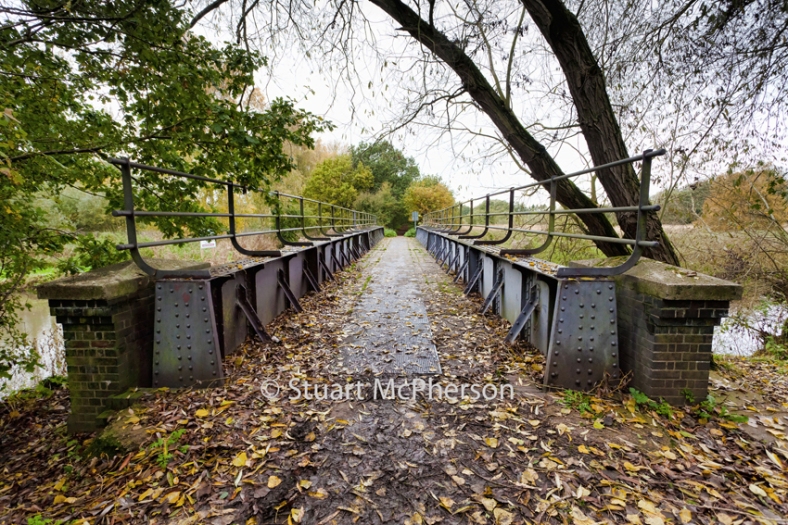 This beautifully-Victorian Iron bridge used to carry the M&GN Railway across the River Wensum at Lenwade. It was built back in 1882 and it carried its last train out of Lenwade and towards the remaining BR system some 100 years later, however; it is still very much in use today and serves to carry thousands of pedestrians and cyclists safely across the water. Come to think of it, this old bridge is probably carrying more people across the Wensum now than it did back in the 60’s, 70’s and 80’s. This bridge (like a lot of the bridges in the area) is an architectural delight and with its exposed rivets and struts, it still looks fantastic some 125 years after it first carried those early steam engines and their stock deep into the rural Norfolk Countryside.

Whilst examining and photographing the bridge for the HLF bid, I noticed the words: “Dorman Long & Co” protruding from some of the Ironwork support struts. I made a mental note of them and after completing my walk went home for a bit of a Google.

Dorman and Long started their business in Middlesborough way back in 1875/76, firstly by fabricating bars and angles for ships before progressing onto larger products such as bridges. The list of bridges produced by the company is quite extensive, but one sticks out from the list a bit more than the others: The Sydney Harbour Bridge. Which just happens to be one of the planet’s most iconic bridges.

So what does a company building small railway bridges out in the deepest and darkest parts of rural Victorian Norfolk, as well as Iconic bridges all across the globe have to do with Mile Cross?

Well, read on and I’ll tell you.

As a company, Dorman and Long went from strength to strength and the contracts for their metalwork kept rolling in. During the early 20th Century one of those contracts was to build steel frames for a new style of local Authority-owned house, or ‘The Dorlonco’. When Mile Cross was being designed the Norwich Corporation wanted to trial quite a few different styles of homes and the Dorlonco, Steel-framed houses were to feature throughout the estate in large numbers. The design was simple and cheap; you erect a robust steel frame and then clad it with other materials, such as bricks, concrete blocks, wood or steel. It was meant to reduce the cost of house building in a time when the Country was still recovering from the great cost of the (not so) Great War. In all about 180 of these houses were built on the new estate in various guises and a few remaining examples can still be found, especially around the northern parts of the estate and in particular, Civic Gardens. 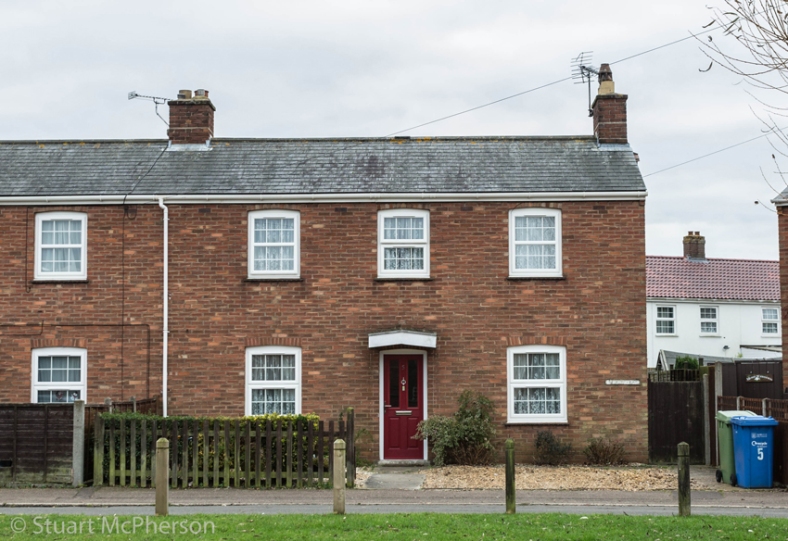 From the outside it isn’t clear that these houses are not built in the ‘standard’ way, but there are a few subtle clues should you venture inside one. Parts of the covered steel framework can be seen in certain rooms mainly across the ceilings, and should you venture into the loft you’d find the exposed metalwork rafters. Another giveaway is that these houses tend to have cheaper brickwork and slate (as opposed to pantile) roof tiles. These houses are not without their issues, the poor quality steel of the time was prone to corrosion around the stantions and this problem was only made worse by poor cladding and a lack of maintenance over the years. You also have to bare in mind that the estate was only designed to last about 60 years and they are all well past their sell-by-date, even the ones built in the ‘standard’ fashion. In some instances the water would penetrate the cladding and get into the steel frame, thus making some of these houses structurally unsound. This doesn’t mean that the remaining houses are unfit for purpose, it just means that they have to be maintained effectively to ensure their durability, just like any other house. Some of the remaining houses were saved by having parts of the frame exposed and repaired before being re-clad. As long as these houses are maintained properly they could see another 100 years or more but because of the issues mentioned above not many of these houses survived after being deemed unfit by the Housing Defects Act of 1984. Only the ones that could be repaired without costing the council too much money were to be saved. It’s for these reasons mentioned above that it is also harder to obtain a mortgage for such a property.

As it turns out, the Dorlonco style of houses weren’t the only victims of the Non-Standard Construction cull of the 1980’s and 1990’s. Most, if not all, of the Concrete-block houses were also demolished. These houses were made using pre-cast concrete blocks instead of bricks and then clad in render so that they looked like any other Mile Cross house. Again, this was done to save money during construction, as well to experiment with newer building techniques. Unfortunately the early style of concrete wasn’t as robust as it is today and the blocks were prone to carbonisation, weakening the structure and allowing the steel retaining supports to corrode. This double-whammy problem meant that all of these concrete houses had to be bulldozed in the 1980’s and 1990’s, but to be fair to them they did make it to their life expectancy of 60 years. After their demolition I remember there being vast swathes of the estate left as barren waste-grounds for a few years. Looking back now it must have been similar to the many bombed-out sites that littered the City that provided the much-needed play-spaces for all those post-war youngsters. Areas that were hit particularly hard by the demolition crews were the Southern end of Bignold Road up to – and including – Lefroy and Gresham Road, as well as the the whole Western side of Bowers Avenue at the top of the (geographical) Galley Hill. Peterson Road and Hansard Road lost most of their houses too.

As the 1990’s matured into the 21st Century, these areas were gradually repopulated with newer houses, but I do remember a few residents clinging onto their ‘condemned’ homes for as long as possible; particularly the last few original houses on Bowers Avenue – just before where the newer 1960’s flats start. I remember one house in particular (the last one on that section) which was owned by the ‘Betts’ family who gallantly stayed put right up until the very end when compulsory purchase orders meant they had to leave their home for good. This same house also sticks in my mind because – as a kid – I’d spend ages looking over their rear fence at the impressive, swimming pool-sized pond, chock-full of massive Koi Carp taking up a considerable amount of the back garden. The newer houses were built set-back from the originals and this was done to accommodate bland-looking parking bays that all modern houses now seem to be blighted with as an ‘essential’, but at the cost of losing the fantastically long back gardens with great views of the Valley, which is a bit of a shame. Another memory that sticks in my mind about this part of Bowers Avenue when it was barren wasteland was of an impromptu fireworks display, arranged by some of the local travelling community. Rockets were flying everywhere, some of which bouncing off the nearby Tower-blocks and houses accompanied by mischievous cheers and twitching curtains. Due to concerns for my own safety, I didn’t hang around long enough to see if there was to be a grand finale, however, I imagine it probably involved blue flashing lights and a scarpering crowd!
Another family of interest to myself (The Bayes Family) spent a few years living in one of these non-standard construction houses. They first lived in Pinder Close before moving on to one of the Concrete Block Gresham Road houses at its junction with Bignold Road. The Bayes family lived here up until the 1970’s when Ethel fell ill and had to be moved into hospital. By then, the four children had all flown the nest and the dad, Bernie had sadly died back in 1969. One of those four children: Graham Bayes, then moved back to the estate in 1977 with his own young and expanding family after accepting a Council House on Gowing Court. In a bizarre twist of Mile Cross fate, Graham’s daughter ended up being my wife.

Like Graham, I also grew up on this estate and like the young Graham I also found myself flying the nest and leaving the clutches of Mile Cross. Like Graham again, I also found myself caught up in the estate’s gravity and ended up being sucked back here with my own young family. My own chapter, now mingled with the Bayes’ family’s many chapters, adding yet another generation into the estate’s fascinating and complicated history. If I look out of my living room window and arch my neck a bit I can see the house where Graham Bayes was born, and if I could then magically swipe those houses out of the way it would reveal the house in which I grew up. This is only just occurring to me as I was type, and It actually hurts my brain a little!

Thanks to my connection to the Bayes family I also have a few photographs taken in the early 1960’s of the family as they lived in that Non Standard Construction House on Gresham Road, and these photographs provide a fascinating glimpse into a part of the estate that is no longer there, but still there. It’s weird to think that if it wasn’t for the people in these pictures my children wouldn’t exist. It’s even stranger when I consider that the history of four generations is confined to an area only a few hundred meters squared of where I’m sat typing this blog. Anyway, before I completely short-circuit my tiny mind, let’s have a look at a few of those pictures:

Ethel posing for a picture outside her front door. Gresham Road in the background. All of these houses have since been replaced: 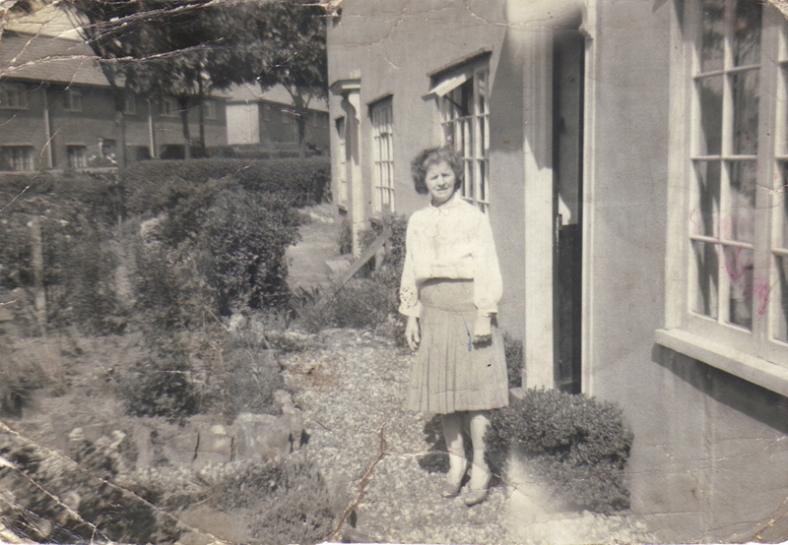 Another shot of Ethel in her front garden. Bignold Road can be seen heading North as well as the old Gresham Road sign:

Ethel and Bernie stood with their Ford Anglia (apparently, this or another Ford Anglia needed to be scrapped and ended up being buried in the garden. I wonder if the builders found it when they built the newer homes!):

Ernie, Ethel and a young Graham, the grandfather to my children:

And finally a slightly blurry shot of the young Graham sat on his motorbike: