For those of you who haven’t (or can’t be bothered to) read the previous piece, Hellesdon Station is a little part of my local surroundings that has fascinated me since I was just a scruffy little lad exploring the streets of the Mile Cross Estate, and its nearby surroundings. Located about a mile away from where I grew up, Hellesdon Station sits in a little corner of ‘old’ Hellesdon that still feels like home turf to me and although I never actually got to see the station as a station (it was demolished a few years before I was born), quite a lot of it was left behind waiting for me to find, hiding in amongst the undergrowth.

I first set eyes on the platform’s victorian brickwork poking out of the bushes in the early 1980’s as (as a young child) I was walked down the old line from Mile Cross to my Aunty’s house in Costessey, and for years after I’d often wondered how it may have looked back in the day. Thankfully, as I grew older a wonderful thing called the Internet was born, reigniting my interest in local history and giving me an easy means with which to research it.

How the sorry-looking platform looked as I found it when first returning to Hellesdon Station as an adult:

Fast forward to about 2010 and after a bit of research I decided (on a whim) to stick some of the crude tools rattling about in my shed into the boot of my car and head down to Hellesdon Station to peel away some of the ivy so that I could see what was going on underneath. Unfortunately (or fortunately) I got a little too carried away and managed to uncover the entire length of the remaining platform, exposing it to the sunlight for the first time in decades. It was great to see the blue Victorian brickwork glinting in the sunlight and later decided to post the relating images online. Those images recieved a fair bit of attention over the next few years, along with my popular “Ghost” rephotography images of the site and the interest in Hellesdon Station began to grow far more than I had originally expected it to. Reading this previous blog entry will explain that story in greater detail.

The City end of the platform about 10-12 years ago: 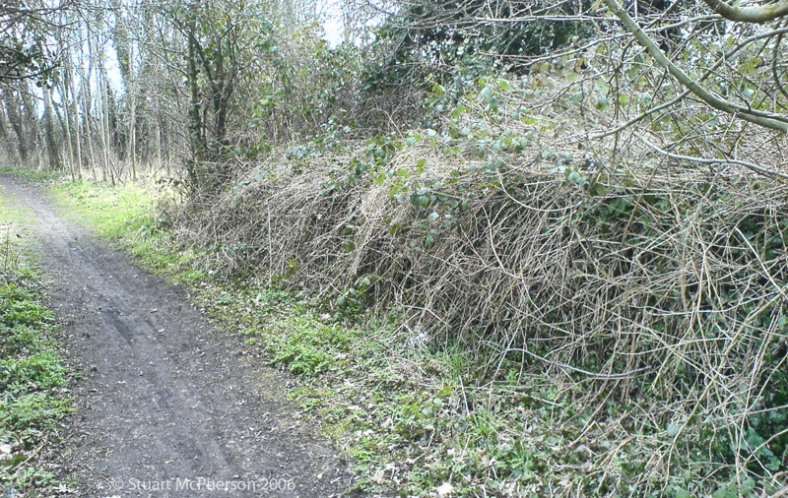 Fast forward again to 2018 and armed with the help of a grant from the Heritage Lottery Fund (HLF) we (FONCS/NRHG) along with the Norfolk County Council finally got to get to work on the neglected Hellesdon Station site officially. Some damaging and potentially dangerous trees were removed, the platform remains were then cleared of the ivy, bushes and weeds that had all but hidden the platform from view, the platform surface was then scraped back so as to be relaid with a hard-wearing surface on which you can walk and sit, the path along the trackbed was cleared and made more accessible, a copy of the Hellesdon Station name-board was reinstated onto the posts that held the original – recreated by the same chap who makes the signs in use along the North Norfolk Railway – a bench was also installed on top of the platform so that walkers or cyclists could take a well-earned rest and the site today (30/06/18) was finally opened up properly to the Public. As well as also being prepared to be opened up to be utilized for learning and training opportunities for local volunteer groups and nearby schools.

The Station’s remains after its recent update:

and how it looked after its part-demolition during the mid 1970’s: 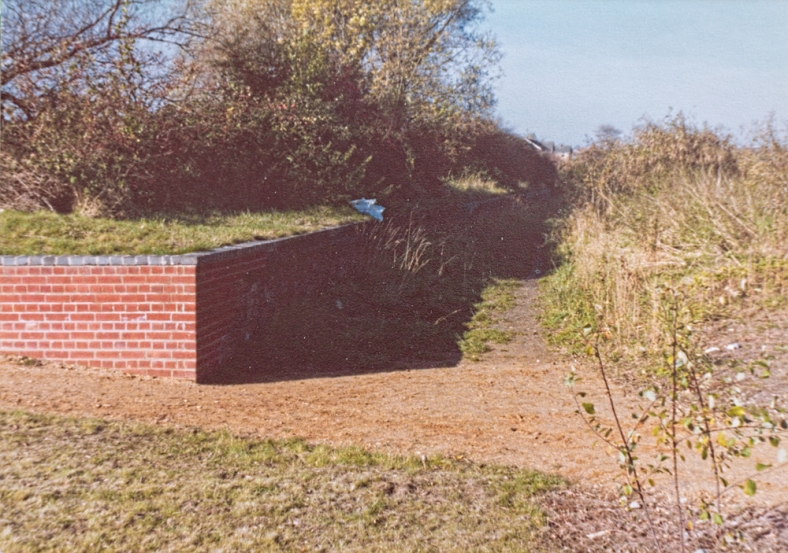 and the same spot back in 2006 when I returned to re-explore the site after a few years as an adult and armed with a camera: 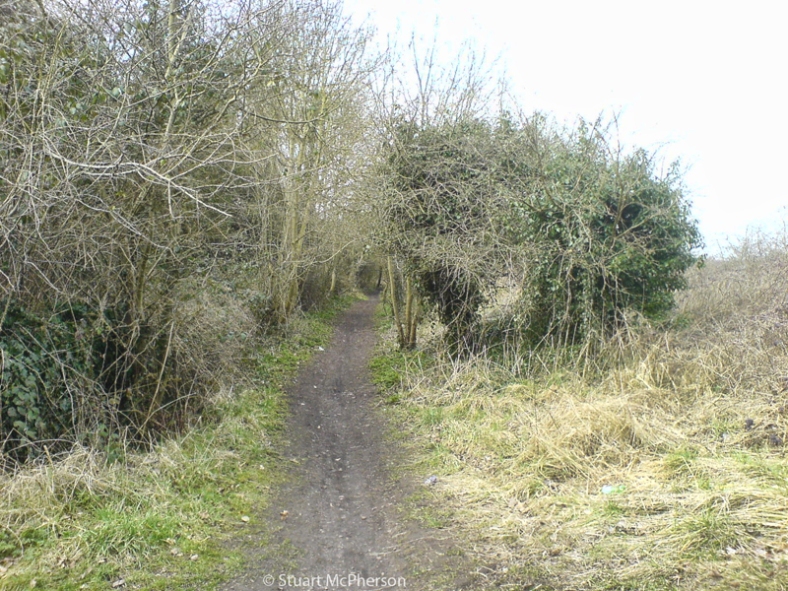 To mark the site’s re-opening, an open day was held on on the 30th June 2018 and as part of the plans for the open day we were asked to reinstate the Station’s wayward M&GN pre-cast concrete Mile Post back into the ground where it belongs, next to the old railway line and opposite the platform remains. This particular Mile Post (along with most of the railway furniture) had been unceremoniously pushed over or destroyed by the demolition crew smashing their way through here in the 1970’s, tearing up the rails behind them as they went.

The demo crew, just before knocking over Milepost 50/III: 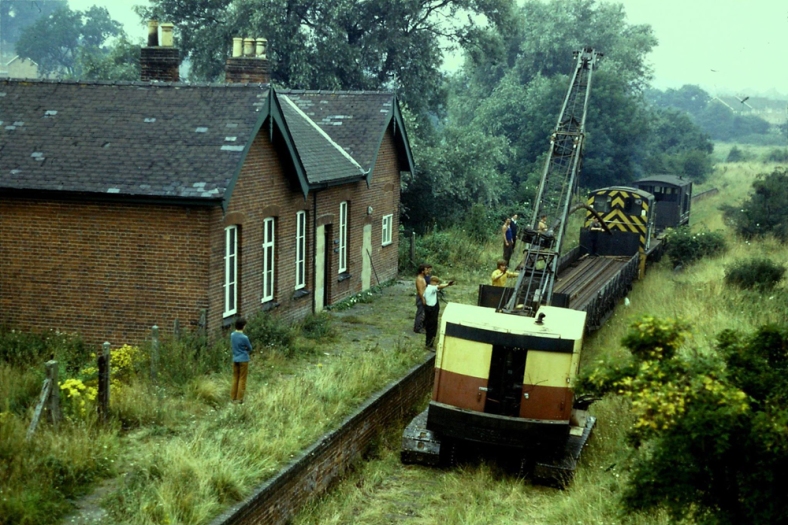 These massive, steel-reinforced mileposts would have been positioned every quarter of a mile along the old M&GN and were used by the Loco drivers and crew to work out their speed and location; you have to remember that those old Steam locomotives weren’t built with speedometers. These concrete items would have replaced the original 1880’s wooden items that were probably falling to bits after spending 40 years exposed to the elements back in the early 1920’s. Luckily for the geeks amongst us, these railway concrete items were usually stamped with a makers stamp (MRC – Marriot’s Railway Concrete) and more commonly a creation date: this particular post being made in 1923, making it a few years older than the Mile Cross Estate. Each of these Mile Posts weighed in at an impressive 15 stone and stood 5 feet tall when lifted out of their holes. 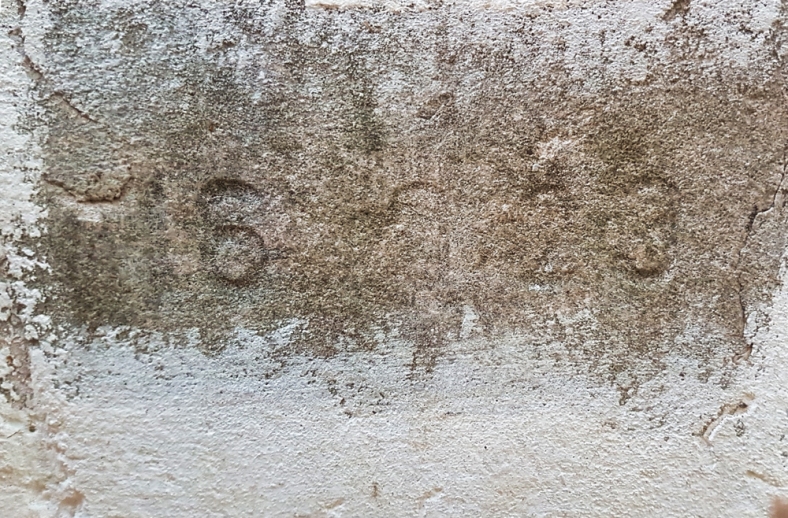 The battered-looking post after being rescued form the undergrowth in 2011:

And after a bit of restoration: 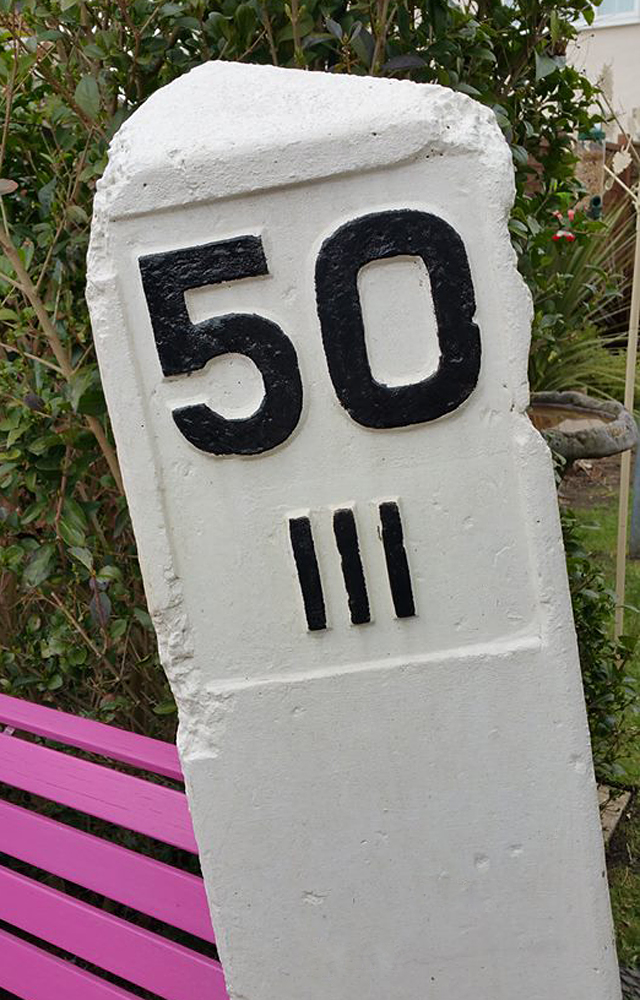 This particular Mile Post made its way back to Hellesdon Station from my garden ealier this week and I had to chuckle as a couple of Norfolk County Council employees struggled to drag it across my driveway before trying to load it onto their trailer. Luckily for them I was there to take charge of the situation and lift it for them, even though I’d come home from work at lunch to meet them and was still wearing trousers, shirt and a tie!

The following pictures show the Mile Post as it was being put back in to the ground where it belongs, whilst a crowd including a local journalist watches on.

The Mile Post ready to be re-homed. Note our resident Whitwell locomotive driver, Dan (in his full driving gear) in the background:

My friend John and I (I’m the one in the dark green top) quickly lift the hefty post into position before the quick-drying cement goes off:

All in all it was an interesting day, we finally got to finish off our Hellesdon Station Project which I unnoficially began back in 2010, after taking it upon myself to start exposing the site (without permission) and proving that (sometimes) if you want something doing, you just have to do it yourself. We (FONCS/NRHG) also got to conduct another of our normally-popular Historical “walk and talks” from Norwich City Station to Hellesdon, and it was great to see Hellesdon Station being enjoyed by the many people attending the open day, or those just passing through along the Marriott’s Way admiring and often stopping for a chat about the fasinating history of this site as well as to chat about what we (as a group) have achieved over recent years.

I must say that it was a very satisfying feeling when something that I’ve been fixated on for many years – and stemming from my childhood – suddenly becomes something that is interesting and relevant to a lot of people in the local community (and from further afield; we had visitors from as far as Suffolk turning up today) and it’s days like today that really inspire me to carry on digging (literally) into the history of my surroundings.

So, until next time (another Mile Cross related piece coming very soon), thanks once again for reading. I’ll sign off with an image of the re-created Helesdon Station name board, lovingly created by the chap who makes all of the signage for the North Norfolk Railway, which was part of the same M&GN system that Hellesdon was an integral part of: