In hindsight this should have been my first blog post; but it wasn’t, and so here it is now. The idea came to me as I was trying to block out the deafening silence my little part of the estate affords me after nightfall. The lack of noise is still a surprise to me every evening as I lay in bed. My wife and I often comment on it, joking about a number of posts we used to see in a Mutual Exchange Facebook group she used to run to help people affected by the then recently introduced ‘spare-room subsidy’ (or bedroom tax) find new homes. The posts in question simply ended with quotes along the lines of: ‘Not Mile Cross, it’s too noisy’ or ‘Not Mile Cross, it’s too scruffy’. “not Mile Cross”. “NOT MILE CROSS”. We often break the dark silence with a random: “Not Mile Cross” followed by a knowing chuckle, before dropping off to sleep. Anyway, I digress. What is Mile Cross? 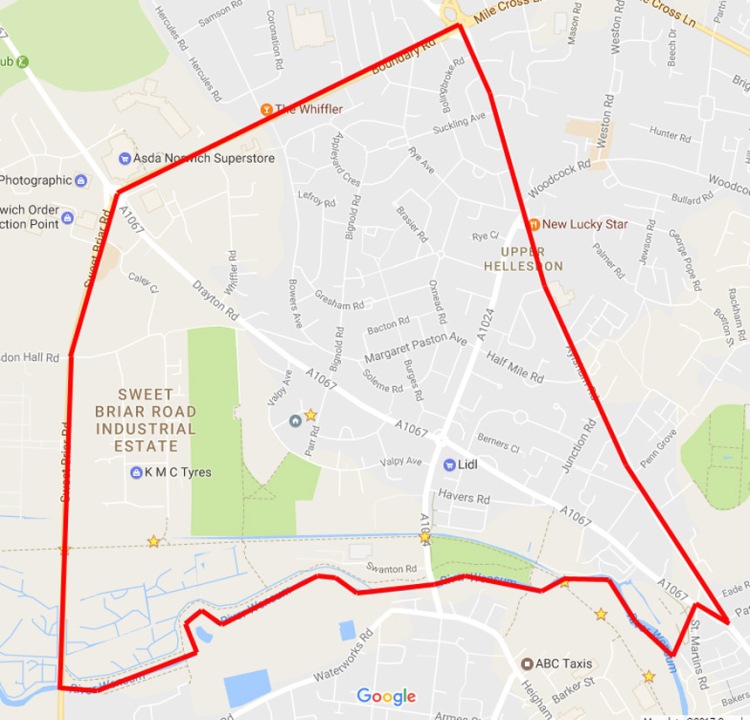 Right now it’s a Ward; a set of imaginary lines drawn on map that the council like to shift around every now and again to suit various agendas and political motives.

Physically however, it’s a collection of homes, parks and businesses that have taken over a piece of farmland on the northern side of the Wensum Valley from the mid-1920’s onwards; it’s a collection of people, it’s an ongoing slice of history, it’s a place that reflects the evolution of the 20th Century, it’s an insight into the life of normal people, and it’s a place fondly referred to as “home” to most of its inhabitants.

To some outsiders it can be a place that people (who probably couldn’t point it out on a map) like to make silly assumptions about, fuelled further by some ill-thought-out local press articles incorrectly pinning the blame for any bit of crime that happens over the river in those northern parts of Norwich, on to the estate. I’ve seen crime reported in the following areas named as Mile Cross: Catton, George Pope, The Marlpit, Earlham, Fiddlewood, Greater Manchester and Sao Paulo. OK, so now I’m being a bit silly, but the place has become a bit of an enigma. To the people who live on the estate this can be annoying. If you took the time to look, you’d see there is a proud sense of community here; a sense of identity, a sense of belonging – and you’d see that this is particularly strong, especially among the estate’s older inhabitants. Some of us who happily admit that we live here on “The Cross” often refer to ourselves as ‘Mileys’. I’ll admit that in certain corners of the estate, the appearance has gone downhill, but this is due in part to financial neglect and poorly thought-out Government policies rather than the fault of all its inhabitants. Take money away from the any of the poorest areas of the country and you’ll notice the effects of neglect are amplified in a quicker fashion than they would be in more affluent parts.

I gained an interesting insight to the thoughts of an outsider when I was stood at one of the work’s coffee machines making polite conversation with a colleague one morning. When finding out that I lived in Mile Cross, he asked me if the all the windows were boarded up, and inquired as to how many fires were raging. He was deadly serious. It seemed to me like strange line of questioning, especially coming a fellow professional. Ignorant to my bemusement he pressed on: “why do you live there? I thought it was only for unemployed people on benefits”. I could have (and should have) gone off on one but decided  -as I was at work – to bite my tongue. Sometimes you just can’t reason with somebody who happily takes on board what the likes of the Daily Mail and Channel 5 are telling them. Especially one who thinks the likes of Thorpe Marriott breeds a better type of person. Anyway, I digress again. I do that a lot…

What the estate was actually named after is unknown, Mile Cross is an area that has some history to it, but we could only find out why the Corporation (Council) named it as such were somehow able travel back in time and ask the Town Planner General Adshead himself what the thinking behind it was. Seeing as we can’t do that we have to look at the scraps of evidence left behind.

There are clues to the origin of the name dotted about all over the area, as well as many references to Mile Cross in various pieces of literature and I shall list them below: 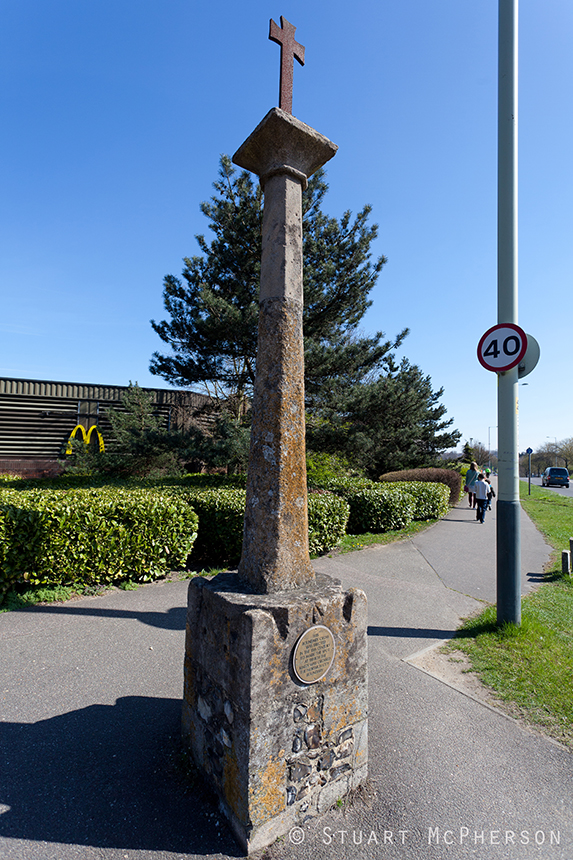 All of which seems to tie the place in nicely with its Mile Cross name. There must be an ancient reason as to why the area is referred to as Mile Cross, but its not easy to ascertain why. I selfishly hope it will remain a mystery.

There is also evidence of human activity in the area dating back a lot further. Just off the Sweetbriar road sat – until recently – the traces of a ring ditch that would have most likely been the footprint of a bronze-age barrow. The site was subject to an archaeological survey back in 1982 and a number of items were found including late bronze-age and early iron-age flints and pottery fragments, an early iron brooch as well as evidence of burials both inside and out of the barrow. A detailed report of their finds can be found by following this link.

This historic site has since built upon with trading units as part of the ever-growing Sweetbriar Industrial estate and the only remaining clue is a small and uninteresting dead-end road named ‘Barrow Close’.

Human activity has been evidenced in other forms throughout the years including many old coins that have been found across the estate, and some like a collection of John, short cross silver coins were unearthed that can be dated as far back as 1199.

So there we have it, I can’t really answer my question. Mile Cross is just Mile Cross, but to me it’s my home, it’s part of who I am and it’s where I currently sit musing and typing all of this out. Typed out that is on a stolen keyboard and PC as little bits of light infused with smoke from one of the many nearby fires stream in through the cracks in my boarded-up windows as occasional gunshots ring out nearby. All watched carefully by yet another Police helicopter circling overhead.   😉

Don’t believe all you read in the local press.

7 thoughts on “What is Mile Cross?”