After the initial phase of house building on the estate was complete attentions were turned towards providing more amenities for the inhabitants of Mile Cross. It was the 1930’s and a third pub and a Church were to be built in close proximity to each other at the northern end of Mile Cross Road.

St Catherine’s Church went up first, it’s foundation Stone was laid by Queen Mary on the 2nd February 1935 and it had opened it’s doors by November the next year. It stands proudly looming over the crossroads of the Mile Cross, Aylsham and Woodcock roads replacing the earlier, Victorian-built St Katherine’s Mission Room of the 1880’s. It is a huge and imposing church when you get up close and personal with it, built primarily out of brick-faced concrete that seems to change colour depending on the light. It was funded somewhat ironically by the Wills Cigarette Family. I’m not a religious man by any means but I do love a nice bit of architecture and this building is rich in it; both inside and out, especially with its Art-Deco inspired interior. Next time you’re passing, pop in and have a look, you might be surprised at how attractive it is. I found the staff (is that the right word?) most welcoming too.

Interestingly, although St Catherine’s is a fairly new Church its bells are the oldest Church Bells in the City. They came from St Mary’s at Coslany after it’s Tower was deemed too weak to be able to support them safely any longer.

A shot of them can be found laying on the grass here before they were to be hoisted into their new home in the impressive tower to ring out over Mile Cross on a Sunday Morning.

I mentioned the Church’s art-deco inspired interior and that leads me on nicely to the Kings Arms pub that was being built shortly after the Church first opened its doors. It sat only a couple of hundred meters to the South and on the same road. It too was inspired by the Art-Deco movement and this could be seen particularly in its fantastically curved steel-framed windows and brickwork, and its strong white detail lines. 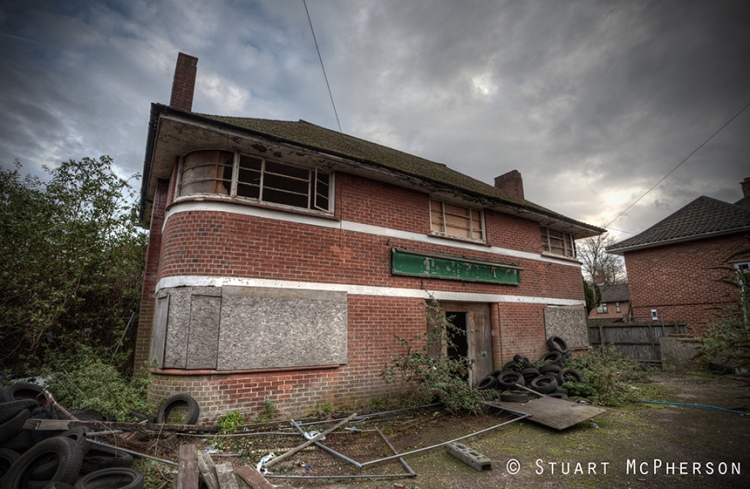 The pub first opened its doors to the thirsty public in 1938 and remained a popular local – especially with the estate’s large pigeon-fancying community – until its untimely demise at the end of the century. The building then sat unloved and neglected for a number of years until it was finally demolished in 2016. Luckily, I decided to go and photograph it both inside and out before the bulldozers moved in and turned the whole thing into the waste ground it is now. I’m guessing it will be replaced with unsympathetic apartments at some point in the near future.

Some interior shots can be found on my Flickr here: lounge bar, kitchen and this fascinating street projection in an upstairs room.

High resolution images of the two main shots above can be found here: St Catherines and Kings Arms.

Once again, thanks for reading.

4 thoughts on “The King, the Queen and the Church.”