When you’re sat in one of the 5 lanes of traffic crawling along Boundary Road at a snail’s pace it’s hard to imagine that less than 100 years ago this now-vital traffic artery was little more than a rural path; a single-tracked sandy lane, rather conveniently named: ‘Sandy Lane’ up until the early 1900’s, before being renamed as the ‘Boundary Road’ we all know and ‘love’ today.

Below is an aerial image of Boundary Road taken in 1928 and for context the semi-detached houses in the bottom right hand corner of the image are the only two houses on Eustace Road. Which is still the case today, although it now joins up with the 1960’s Bowers Avenue extension. It looked little more than a farm track back then:

Before the first bricks of the estate began growing skywards from their footings set into the soil of the countryside bordering Sandy Lane, there would have been little else out here on the remote fringes of our early 20th century City. There was nothing but open and unspoiled Norfolk Countryside, stretching out from Mile Cross as far as the eye could see. A far cry from how it all looks now.

Galley Hill and it’s undulating heathland would have spread It’s way southwards, heading towards Drayton Road and sloping away towards the River Wensum.

On the other side of the road – on what we now refer to as Hellesdon – only Boundary Wood and its surrounding fields existed to hem this quiet, rural and unassuming track in its place.

As Boundary Road/Sandy Lane headed North East the lane would have ambled across what is now the chaotic Boundary Junction, past a few houses sat between the Cromer and Reepham roads (and their accompanying duck pond) before curving Eastwards past a school situated (where the car-hire business now sits) and out towards Catton Park; passing through the substantial Catton brick works as it did. These brick works would have undoubtedly been where the bricks used to build Mile Cross Estate would have been made and I doubt the phrase: ‘sourced locally’ would have been a phrase used to impress the new tenants into accepting residence on the new estate back then.

To the South West the lane would have crossed what is now the busy Asda junction and headed off South towards Hellesdon Hall Road (covered earlier in a previous post), where it would have promptly ended. The rest of Sweetbriar Road didn’t pop up until the early 1930’s when the ring road started snaking its way around the outer-most reaches of the city to ease congestion (they didn’t know the meaning of congestion back then going by some of George Plunkett’s fantastic pictures taken of the newly-opened circular route) and was just Briar Marshes, which will be covered in a future post. From up here at the higher end of Boundary Road you would have been afforded a fantastic Panorama of the City. Hints of that Panorama can still be made out through the gaps in the trees and the later-added factories. The Cathedral rises briefly as you drive or walk towards the City past what is now the Car Shop (formally Autowrappers), and if you stand on the right bits of the Asda car park it will give you a flirtatious glimpse of its tall spire. I can remember there being a good view of the City from the junction of Sweetbriar and Hellesdon Hall Road in the 1980’s before the Sweetbriar Industrial estate had started to grow. Sadly these views have since been lost to an ever-expanding Norwich.

Mile Cross Estate started to appear at the Northern end of Boundary Road in the late 1920’s from Aylsham Road to Marshall Road before heading away East, leaving a fair bit of open space between Boundary Road and Drayton Road. This open farmland (of sorts) is where the infamous ‘Fungi’ kept his animals and it extended southwards to the heath land of the geological Galley Hills. It wasn’t until the 1960’s that the estate’s expansion started to fill all the green bits in with the greys and browns we see today. A 1960’s extension to the estate witnessed the arrival of the flat-roofed houses that now shadow the eastern side of Boundary Road along with the Three Tower Blocks and smaller blocks rectangular flats situated a bit deeper into the estate at the Northern end of Bowers Avenue. A new road, named Whiffler Road was also put in between Boundary Road and Drayton Road presumably named after the nearby pub. I’m not really sure what (if any) connection this particular area has to Whifflers. This new road was more industrial in flavour, bringing with it many Factories and Garages, putting further distance between the Estate and the Countryside it used to enjoy being neighbours with.

The green bits on the Western side of Boundary Road were being filled in even earlier than that though. The 1930’s came along and with it the rise of the Bungalow. Hellesdon is home to the Bungalow and wherever you go in Hellesdon it seems like you’re never more than 25 foot from one. A lot of the older Mile Cross residents have traditionally seen this part of Hellesdon as the Mile Cross retirement home; many former residents going ‘up market’ and re-settling across the border to see out their twilight years.

The Bungalow revolution started to spread further Southwest along the Northern edge of Boundary Road as the 1930’s matured and along with it came something a little more interesting. On the 6th October, 1932 the well-equipped Boundary Park Stadium opened its doors to a willing public. Greyhound racing was a very popular sport back then and Norwich had a number of tracks, this one however was said to be one of the best for its time sporting a revolutionary all-electric totalisator.

The below image was taken from where B&Q is situated now, looking back towards Boundary Road and Mile Cross: 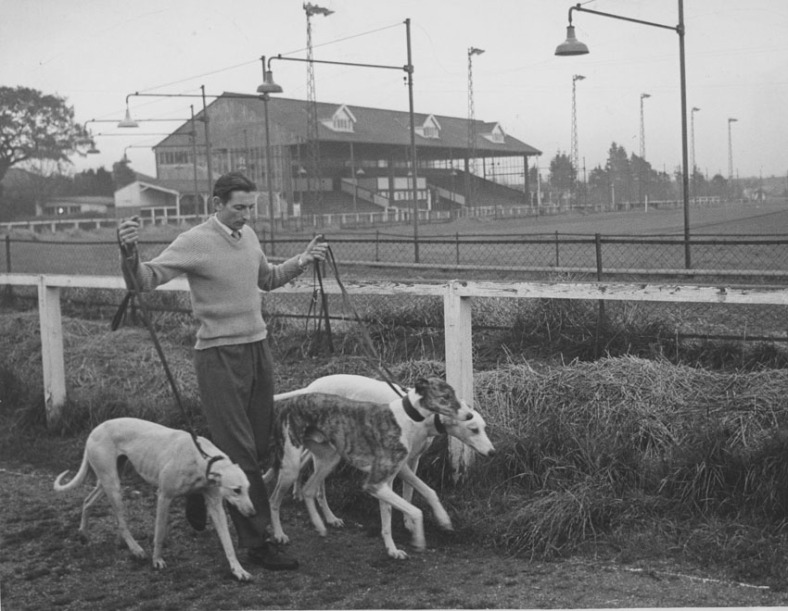 The track closed its doors to the public some 30 years later on 1st December 1962. An interesting point to note is that this site almost became the new home to the Norwich City Football Club and was one of the sites up for consideration when the Canaries started to become a more successful team and realised it was time to fly ‘the Nest’ (see what I did there?). It was bought up by Eastern Electrical and remained their main depot until the site was sold off for a new B&Q store which still stands there today.

On the 5th March, 1938 a new pub by the name of ‘The Whiffler’ appeared on the scene, opening its doors to the thirsty inhabitants of the newer Hellesdon bungalows and – no doubt – followed in by a raft of thirsty, migrating Miley’s.

The Pub is still a popular watering hole for a lot of Mile Cross residents, one of whom being my father, who can be found in there most days now he has retired. A lot of the patrons of the former Galley Hills Pub also frequent this pub. An interesting point raised on the Norwich Pubs Directory is that one of the former Landlords, a ‘Gordon Cooke’ was involved with the Dam-Busting Lancasters of 617 Squadron. I can’t find anything to corroborate this story, but I could see that there was a First Sergeant  ‘G Cooke’ who survived an accident in a Mk1 Lancaster (Code ME561). If you know any more about this story, I’d love to know.

A little bit further along Boundary Road was the Boundary Wood. This little stretch of woodland isn’t quite as accessible as it was back in the day, the Southern portion making way for bungalows and the northern end mostly within the borders Golf Course, however you can make it out on Google Maps. It is fondly remembered by quite a few of the older residents and is often talked about when childhood memories are being discussed. It seemed like a bit of a focal point to a lot of the local children.

On the 3rd October, 1944, this area was also close to the scene of where the warhead of a V2 bomb landed. It was launched from its missile pad situated all the way across the North Sea. This particular V2 started its long and arcing journey from the Netherlands and at the height of its trajectory making a brief encounter with Space it began its descent to wards its intended target of Norwich. At 7.45pm the missile started to break up as it descended over Mile Cross. Luckily, Its warhead just missed the estate and landed in the Eastern corner of the Golf Course, not far from where the ‘Sports Village’ or whatever it’s now called stands. Even though it landed in a relatively underpopulated area I believe that one unlucky person was killed by resulting explosion and that over 400 nearby homes were damaged. Those numbers would have been far worse had this V2 fallen a few hundred meters short and onto the built-up Mile Cross Estate. The crater still serves as place for local kids to have a good sledge on those increasingly-rare occasions we get some settling snow.

As the estate matured into the 50’s and 60’s the area around the Boundary Pub began to become increasingly busy. The cottages and duck pond were replaced with the ugly, curved building now housing an Indian Buffet that sits on what is now essentially an outsized traffic Island, and started its life as a futuristic car show room. Shops began to appear on the other side of the road opposite the Boundary pub where (among other shops) Kerrison Toys now resides, one of which being the very popular Cafe named the ‘Boundary Buttery’. This little Cafe was a firm favourite with Bikers and rockers scene that grew out of the 1950’s and into the 1960’s and was home to the infamous ‘Ton-up’ crew. I’ve heard from many sources that a song would be selected on the jukebox and a rider (or riders) would have to race their motorbikes South along Boundary Road to the junction of Drayton Road (by then a roundabout) and back again before the song had ended.

All in all Boundary Road now is a far cry from how it was not all that long ago and serves as a reminder that Mile Cross is no longer a suburb sandwiched between the City and the Countryside. Mile Cross has been well and truly consumed by the greedy City as it feasts its way outwards, couloring in all the green bits as it goes.

Thanks once again for reading and if you have any memories to add, I’d love to hear them.

16 thoughts on “The Boundary”