Living on the edge… of the Countryside, that is.

This is just a short entry to share a few images I stumbled across over the last couple of years. Taken during the 40’s, 50’s and 70’s these images serve to show us fascinating glimpses of living in Mile Cross when it was still connected directly to the countryside.

The handful of pictures below were taken from number 2 Bignold Road in the 1940’s, 1950’s and from Hellesdon Hall Road in the early 1970’s. The earlier images give us a brief insight into every day life on our estate almost 60 years ago and the later images showing how the fields were still touching the edges of Mile Cross until fairly recently. One of the earlier pictures was being shared on one of the many Facebook memory groups by a chap named Ron Sheldon, and as fascinating as the picture was it was one of the accompanying comments that really got me thinking.

“My grandparents lived at 2 Bignold road from when it was built until the late 1960’s, my father born 1921 spent most of his childhood there and went off to war from there too, from their back garden it was just grass all the way to where Asda now is!”.

It’s something I’ve touched upon a few times in some of the previous blog entries and it’s something I can almost relate to. When I was a kid growing up on this estate in the 1980’s the areas to the West and North of Sloughbottom Park were still fields. I used to play in the cornfield occupying the triangle of land between Drayton Road and Hellesdon Hall Road before Anglian Windows and a few other factories turned up: 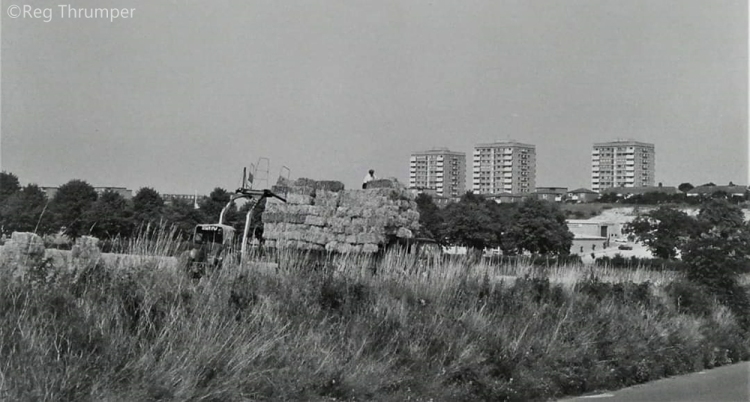 The cornfield by Hellesdon Hall Road with the 1960’s peering over them.

I also remember an uninterrupted and almost panoramic view of the City from the Junction of Sweetbriar and Hellesdon Hall Road. These young memories are very brief as the views and the fields were rapidly making way for the Industrial units and factories that now make up the Sweetbriar Industrial Estate:

The view of the City from Hellesdon Hall Road in the 1970’s before Sweetbriar Industrial Estate ruined the view. Note Sloughbottom Park just beyond the field and how the N&N Hospital took up a rather large portion of the Norwich skyline.

Had I been born a few decades earlier there would have been even more fields on my doorstep for me to play in and explore. The fields from my childhood would have extended northwards across Drayton Road, over what is now Whiffler Road and all the way up to the North-Western fringes of the estate. Unfortunately, from the 1960’s onwards these fields were being rapidly consumed by post-war expansion and the greens and golds of nature finally gave way to the greys and browns of concrete and bricks. Bowers Avenue and Lefroy Road were extended, Bowers Avenue making it’s way through the hilly heathland all the way to Eustace Road (and beyond) and at the foot of the hills to the South, the newly-added Whiffler Road came along, bringing with it an Industrial flavour to replace the gently undulating fields of golden corn.

Back to number 2 Bignold Road. Although it was close to the centre of Mile Cross the early residents living in the houses along the North Western side of Bignold Road would have had nothing at the end of their garden but fields and heathland which would have extended for as far as the eye could see. Those lucky residents must have felt as if they lived in the countryside, and to a certain extend they did. Appleyard Crescent would have drifted away North to the right and the undulating land would be have given a great view of the heathland sloping down the sides of Galley Hill, over the quiet Boundary road and back up again into what is now the Mile Cross Retirement village of Hellesdon, which back then would have had very little in the way of buildings; from this viewpoint at least. This countryside view would have remained pretty much the same for the best part of the 4 decades that spanned from the late 1920’s right up until the 1960’s.

I can’t imagine how the residents must have felt when the 1960’s turned up with it’s 1960’s tower blocks and flats to rob away that feeling of freedom and to cast ghastly silhouettes across their vast and open skies.

I can only imagine that it must have had a profound impact on the dynamics of the Estate as a whole, going from being on the very edge of the City, connected directly to the countryside to having another Estate built right in your back garden, and all in a very short space of time. Having all the fields and greenery swept aside for the short-sighted 1960’s vision of the future and being abruptly disconnected from what gave these homes their countryside character. Imagine going from a country cottage feel, to inner city suburb in no time at all. To add insult to injury these homes didn’t just lose their countryside, they also lost their sky. It must have come as a massive shock to those poor residents. Or did it? Maybe I’m looking back on it all through my 21st Century, rose-tinted spectacles.

Perhaps they were annoyed, perhaps they didn’t care, or maybe it was quite exciting, or perhaps it paled into insignificance; after all it was happening during a period of massive change for the whole of the country. – Who knows, but if there are any residents from that era who witnessed the 1960’s steam-roll their way onto the estate reading this, I’d love to know how you felt about it all and whether it did have the psychological impact I imagine it should have had.

The filling-in of the bits of Countryside that still touch with the outskirts of the City continues to this day as the City bulges well over it’s expanding waistline, consuming the nearby villages as it does so and I guess this piece acts as a metaphor for the changes we are seeing again today – and will be seeing more of – as the isolated bits of countryside now finding themselves marooned between the City and newly-built NDR are rapidly being filled in with Lego houses, Trading estates and Car parks. There are people around the City now going through what those Mile Cross Residents went through back in the 1960’s and I bet it’s just as bitter of a pill for the people of today to swallow as it was for those people back then in 1960’s Mile Cross. 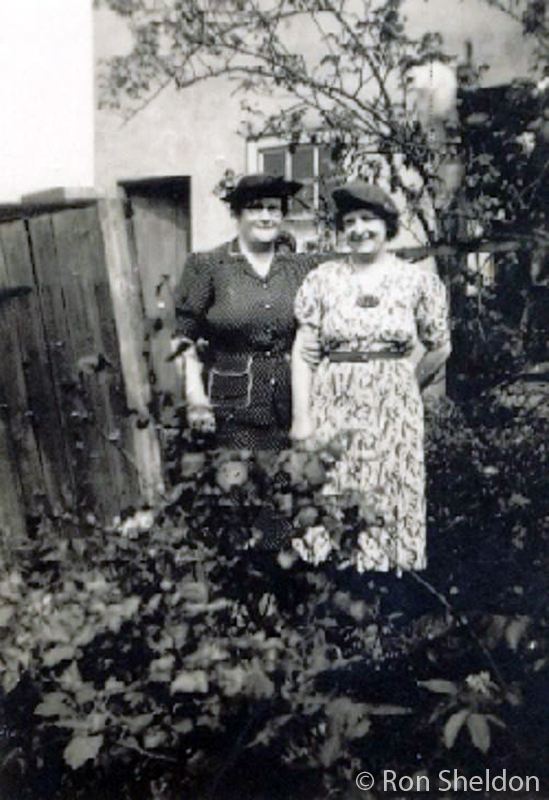 Lily Sheldon (left) and her sister Elsie (right). Lily was born in 1900 so this picture was most likely taken in the 1940’s. Note the country garden feel. Elsie was married to Herbert Cutmore who ran a bakery on Barrack street, next to the Sportsman Pub (which is now home to my dentist, My Dentist). 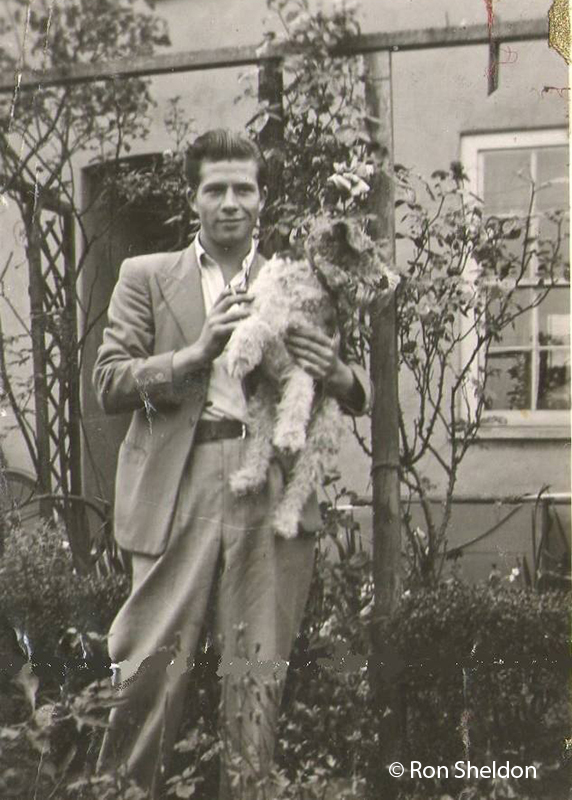 This handsome-looking young man is Ron’s father, and he’s stood holding a dog and a cigarette in the rear garden of number 2 Bignold Road in 1939. Big empty skies are reflected in the living room window and the country garden feel is still in evidence.

Like most Mile Cross lads, Ron’s father wasn’t always an angel; Ron recalls: “My dad used to tell how him and his mates used to go to the car park of what was then the dog track on Boundary rd and (don’t ask me how) ride round in any cars they could get going, once he was in the Dicky seat (where the boot would now be) and when the police arrived all his mates did a runner except him who could not get out quick enough – probably got a whack round the ear or taken back to 2 Bignold for punishment by his father”.

I love that, it just shows that boys have always been boys, and always will be. Bloody youth of the past! 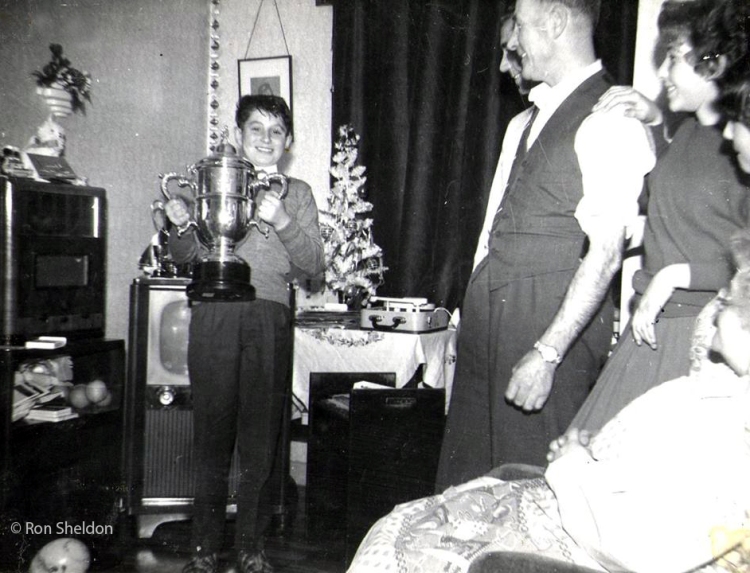 A young Ron, stood in his Grandparent’s living room at 2 Bignold Road, proudly posing for the camera whilst lifting a trophy back in 1958. Note the Wireless, TV and Portable record player. The houses up that end of Bignold Road are the same layout as mine, so this picture looks like it could have been taken where I’m sat now typing this Blog. Ron’s Grandfather ‘Duke’ had recently won the All England pairs Cup at Bowls in Skegness, hence the smiling faces and nice big trophy. It’s such a lovely photograph. 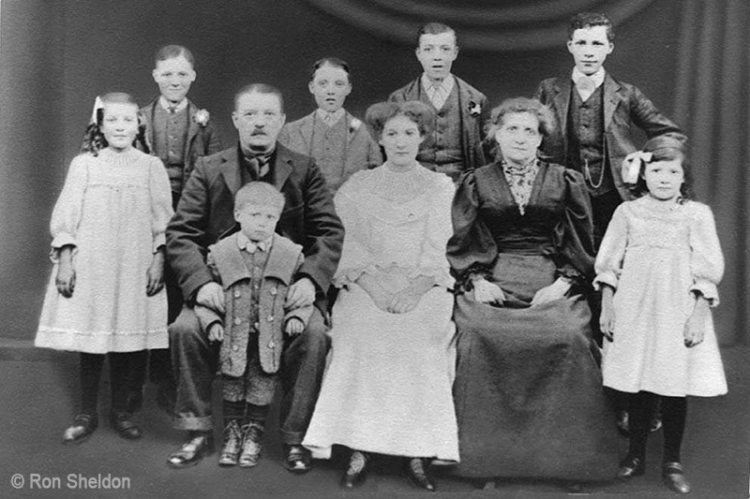 The above image shows a young Lily (on the right) in this fascinating family photo taken of the Clark Family who lived on Ropemakers Row, showing that Lily was a Mile Cross Girl through and through! It’s an interesting picture as you can see that it’s obviously been altered by the photographer. And people say that image editing is a new thing!

In 1968, Duke and his wife were offered a flat in Millers Lane, encouraged (financially) by the council to downsize so as to free up a 3 Bedroom Property for a family to which they happily obliged; most likely to get away from those imposing Tower Blocks that were now overlooking their once-private country garden and so that Duke was nice and close to Waterloo Park where he captained the Waterloo Park Bowls team for many years. There’s a silver lining to every cloud! 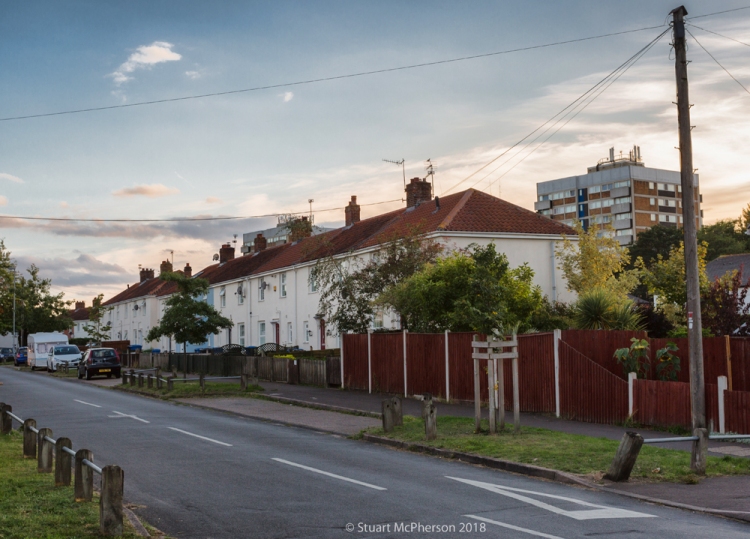 Numbers 2-10 Bignold as they were this evening. Note the less-than-conspicuous Tower Blocks now getting in the way of a fine September sunset. Imagine those appearing at the end of your garden accompanied by multiple 4 storey blocks of flats to boot. You wouldn’t be happy about it.

The following images are from an earlier blog entry, but also really help to show the rural setting that these homes backed on to right up until the 1960’s: 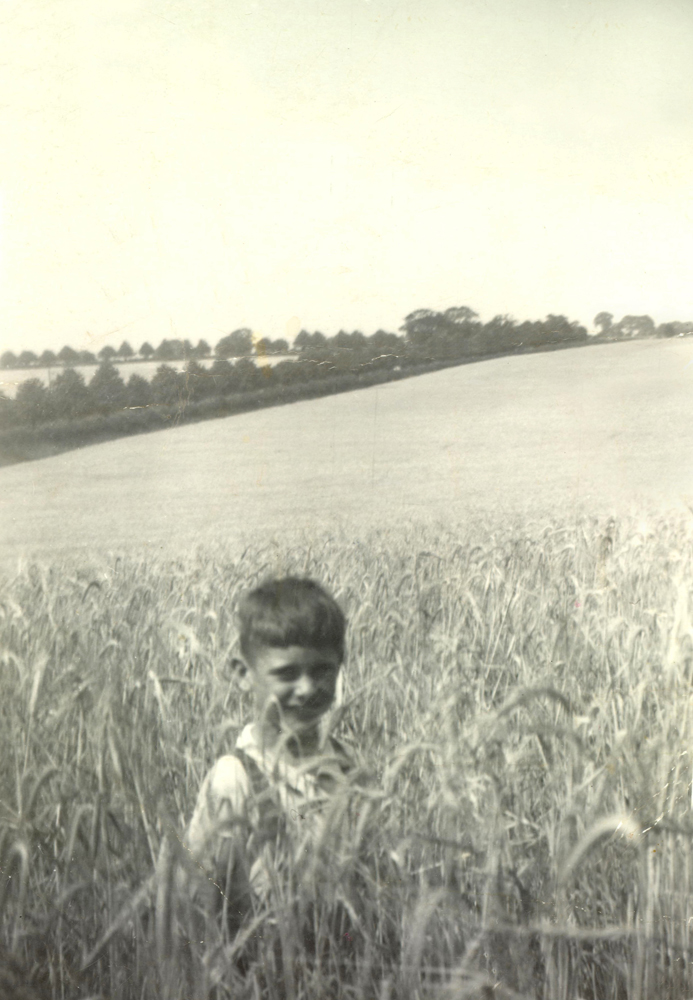 A young Stuart Ulph sat in amongst Cornfields undulating their way up to where Asda now sits. This area is now ruined by Whiffler Road and its Industrial buildings. Drayton Road can be seen on the left hand side. The field from the 1970’s image above can be seen left of middle. 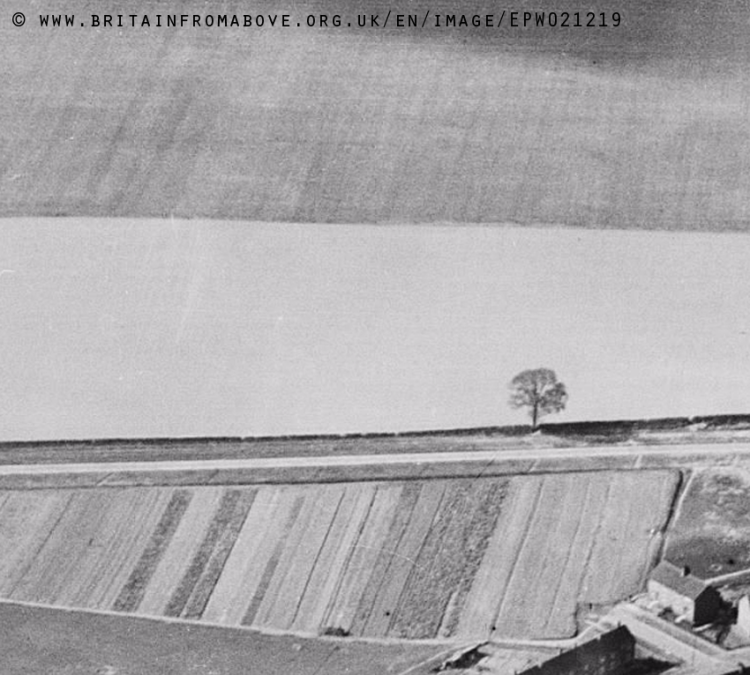 An aerial shot of the fields that ran up to the back of those houses on Bignold Road and Appleyard Crescent. Boundary Road (running across the middle of the image) and Eustace Road (bottom right) can also be seen right next to the farmer’s crops. 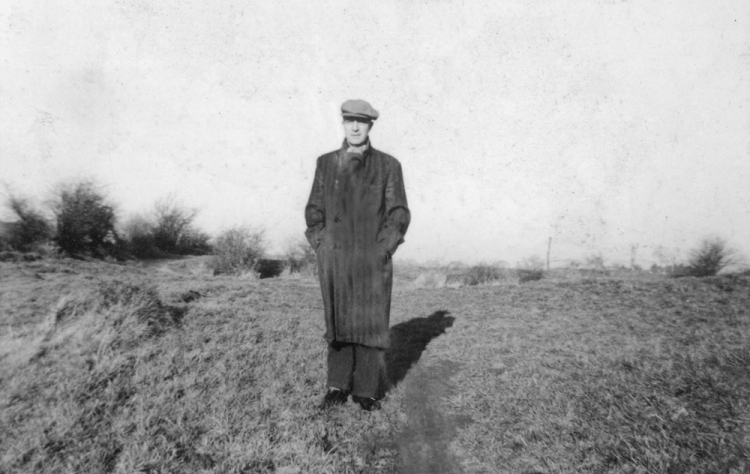 Stuart Ulph’s father stood in amongst the Heathland, on what is now the extended Bowers Avenue.

Thanks to Ron Sheldon for sharing with us these lovely old photos as well as an insight into his family’s history, and thanks to Reg Thrumper for supplying the later, 1970’s images two years after I’d first released this blog out onto the internet. Thanks also to you horrible lot for taking the time to read these musings.