I don’t normally dedicate a whole blog post to just one photograph, particularly one not taken inside Mile Cross, but this one has some history with a bit of a rant attached, and because the blurb for the original photograph on Flickr started to resemble a blog entry in itself, I thought I might as well drag it out a little for the sake of my sanity. Read on.

It’s Wednesday the 15th April 2020 and I’ve just finished work for the day (I’m lucky enough to be able to carry on working from home, for which I am eternally grateful). However, growing sick of being sat in my living room and looking at tedious Insurance Wordings for 40 hours a week, I’d made the decision to take my family out for our daily, guilt-edged, state-allowed walk; which can be quite awkward for you when you’re a family of four that has a six-foot one teenager in it’s mix. I try my best to plan our walks quite carefully so that we avoid as many people as we can and I’m in the enviable position of living on the ‘Drayton Estate’ part of Mile Cross, right next to the Mile Cross and Sweet Briar Marshes and the Marriott’s Way.

Unfortunately (or fortunately for those who can use it) the Marriott’s Way currently resembles a non-stop, 24-hour training camp for the 2021 Marathon, as well as being the setting for a constant 3-week and counting ‘Tour-de-Norfolk’. Now I’m not so naive to realise that I may be indulging in a bit of ‘covid-shaming’ myself here, but what I’ve quickly come to realise is that walking city-wards, makes for a far-more pleasant and bizarrely ‘people-free’ environment for the family stroll.

With this in mind I’d decided to drag the family out for our daily walk on a rather bizarre route that takes in the start of the Marriott’s Way without having to actually walk down the path and with that having to talk my family into jumping into a bush every time somebody with no concept of “social distancing” comes the other way.

Of course there was an ulterior motive for my bizarre and convoluted journey; I wanted to retake (for the second time) a photograph of the Halfords Roundabout for a particular ‘ghost’ image that I’d taken (twice) almost a decade prior. A picture that I’ve been meaning to retake (again), without being beeped at by f*ckwits driving (or being jeered at by the passengers hanging out of the passenger window of a) Transit Vans as they make their way around the inner-link.

It’s amazing how taking a photograph with a DSLR can bring out the most insecure members of our society who wouldn’t look twice if you were to be taking the same picture on an Iphone, but that’s the 21st century for you.

Anyway, moving on to the entire point of this rather bizarre blog entry:

As mentioned above, the excuse for our bizarrely-routed walk was partially to take me through the remains of the former Norwich City Station so that I could re-re-imagine an earlier ghost photograph, created (rather-scarily) almost a decade prior which had been taken – unwittingly – from the wrong position twice; mainly because I was not then aware that the bay platforms numbered 2 & 3 along with the 4th platform (which would have been under Halfords and it’s car park) had to be completely rebuilt (and thus shortened) in the early 1900’s due to substantial subsidence caused by building a rather large railway terminus on a man-made Island, in what used to be the wider mill-pool of the Mill at the confusingly-named New Mills Yard; there’s been a mill here for almost a millennium.

Now this is where re-photography (ghosting) becomes a little mind-bending. It’s six months before the old M&GN line is about to close and I’m stood taking a photograph of a roundabout, glad that there are no jeering van drivers to be seen and also hoping that no Police Cars come past to spot me stopping (how dare I?!) to take a picture whilst out on my state-sanctioned walk. 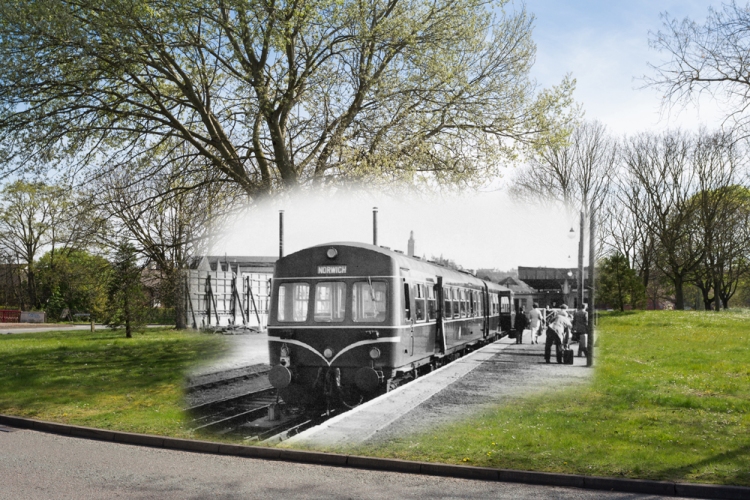 As we can see, the summer of 1958 was far busier than the (early) summer of 2020 and a smart-looking DMU from Melton Constable has just pulled up onto a roundabout of the future. A fair amount of passengers are alighting to head into the city centre and thankfully for them, their ghosts are in no real danger of being run over by a van-driver from the future because of the lock-down. I wonder where in Norfolk they’d caught this particular train, slightly jealous at their freedom of movement and wishing I could have enjoyed the view that they had of the beautiful countryside that would have guided this train into the very centre of our fine city. These new and modern green and gold, British Rail DMU’s would have afforded these passengers fantastic panoramic views and unusual for people born in my era, a forward-looking view along the tracks and including the driver. What I wouldn’t give to see what they could see back then with my own eyes. Luckily for me, a photographer from the past had pre-traced my footsteps and was here with me by the roundabout that wasn’t there in the past, taking the very same same picture.

Briefly, I wonder what these passengers would have made of “social distancing” and the concept of ‘covid-shaming’ people who were just trying to get through – hopefully – the weirdest period of their very-own moments of history in the making. I’m not going to stand and wonder too long though as I’d better get on with my wander before being judged.

Before I end this particular blog entry I will just point out that my state-sanctioned walk continued through the shot and out of the long-gone railway terminus over a railway-built bridge that still serves our city to this day. This Barnard, Bishop and Barnard bridge is usually carrying thousands of vehicles across the Wensum as part of the inner-link. It’s a beautifully crafted and often ignored bridge from 1882 that was built to carry traffic along Station Road, onto and off the man-made island on which the station was built:

I’m not sure those engineers from the past would have expected it to succeed the railways and lived on to carry countless tonnes of goods that back then would have been carried on the freight trains that have long-since gone and that this bridge would have been their one true success at City Station.

One thought on “A ghost redone, redone. And a point, laboured…”