This cramped development of shoe box-sized houses was built on the former site of the Edwards and Holmes shoe factory. The factory was finally demolished in around 2002 and had stood there since it had been completely rebuilt in 1946 after the original factory had been destroyed during a German air-raid back in April 1942.

Here it is -closed- just before it’s demolition, note that the upstairs was being used as the Miller Dance Center: 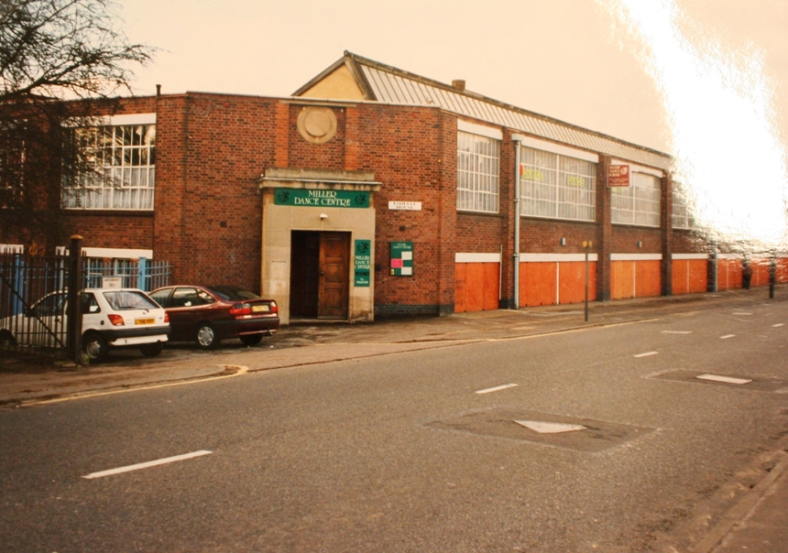 And again in the 1930’s about a decade before the Germans had a go at redesigning it as a crater: 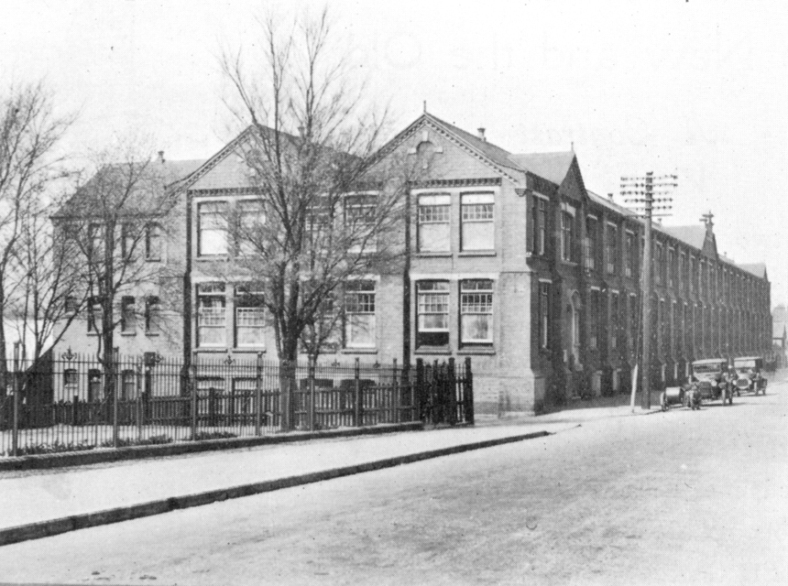 Before this site was used for the production of shoes, it had been a riverside rope-makers row and that is how the road (and former pub) opposite received it’s current name.

The site is now occupied by the ill-thought-out ‘Wensum View’ housing development which consists of over-priced, modern, ‘Lego’ Town Houses and a small collection of tiny Social Housing homes seen in the top image, above.

The steps now leading down to the front doors of these Drayton Road facing houses were built into the recesses left behind when they removed the path-top skylights that used to allow light into the sunken factory floor. I used to be fascinated by these glass tiles as a child when walking home from St Augustine’s or Wensum Park and would often get down on to my hands and knees to peer through a crack in one of the tiles to watch the factory workers beavering away, along with all that noisy machinery, clattering away in this subterranean workshop.

In a nod to the site’s past, the streets of this housing development are named after some of the activities that were carried out here when it was a shoe-making business, such as: ‘Finishers’, ‘Clickers’ and ‘Bootbinders’.

The site is quite large, stretching from the new Aldi site (formerly Wickes) all the way to Wensum Park, and from Drayton Road to the bank of the Wensum. This 1930’s image taken from the opposite bank of the Wensum, close to Norwich City Station gives you some sense of the site’s size:

It’s replacement can be seen bordering the Wensum here in the 90’s (Wensum Park is in the background):

And again, just after the new houses appeared:

I wasn’t going to cover this story until later, but it was thrust into the forefront of my mind the other day after reading a story about those poor survivors of the recent Grenfell Tower Fire. The Government recently acquired 68 flats to permanently re-home some of the survivors of that tragedy in the nearby (and supposedly ‘posh’) Kensington Row development scheme. The area is very sought-after due to its location and is in one of the many areas in London where rampant gentrification (and social cleansing) is apparent. Bearing in mind these properties had already been allocated for Social Housing, it shocked me how some of the nearby residents had reacted to the news of their soon-to-be-new-neighbours. Some of the comments were quite frankly disgusting and the ignorance and selfishness of some of these people really got to me: “There goes the house prices”, “Who’s going to pay for the crime-wave that will accompany the Social tenants moving in?”, “This isn’t fair, we have to work hard to live here yet they get to live here for free” and much worse…

It reminded me of my time spent living here on the Wensum View housing development which now sits on the former Edward and Holmes factory site.

Having lived on the site for the first seven years of site’s life; we, as ‘Social Housing’ tenants (spit) spent a large chunk of a decade on the receiving end of exactly these types of attitudes. Ignore the fact that my wife and I were young(ish) professionals in full-time employment and about to start a young family, we were looked down on and treated by the majority of owning tenants – and their ‘Residents association’ – as scum. In the final year of our tenancy we eventually held a meeting at my home with their ‘residents association’ to discuss the issue of a problem family we were all suffering with at the time and I can honestly say that these people appeared to be genuinely amazed that we didn’t have shit smeared all over the walls, and were indeed (fairly) normal people: “It’s actually quite nice in here” was one of the comments that stuck with me. How I remained calm and composed with these attitudes on show in my own living room by people I had invited in still amazes me to this day.

On another occasion my wife overheard a conversation between two clipboard-wielding and smartly-suited chaps stood outside our living room window. One said to the other: “and this is where they house all the unemployed and single-mothers”. Whoever they were they soon scurried away when she opened the front door to confront them over their ignorant views. I wish I could have been there at the time!

I can safely say that ‘Wensum View’ could be used as a model on how not to build a modern housing development. The segregation of the Social tenants, the tiny and often non-existent gardens, the cheap construction and open-plan approach that made no sense when trying to keep two classes apart from each other was badly thought out and nonsensical. I’m not even sure modern building regulations would even allow for anything like this to be built ever again. Let’s at least be thankful for that.

Personally, I think the whole lot should be knocked down and converted back into a shoe factory.

4 thoughts on “Shoes to shoe boxes”